Spicy Tales – The 5 AM Mommy 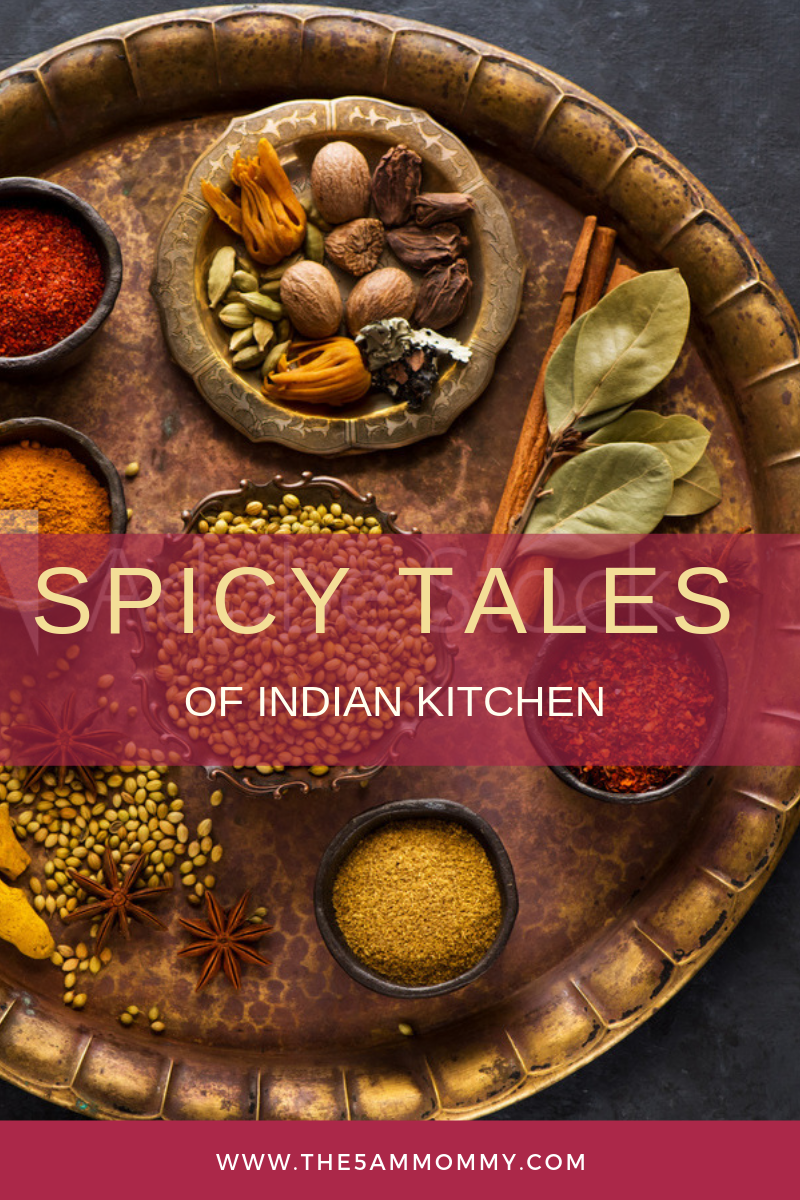 Life is all about spices, especially when you have taken birth on the mother earth, whatever life happens is surrounded by some chunks of glorious spice.

Sometimes it is as captivating as the smell of nutmeg and the other times it is a good enhancer of the experience much like the cinnamon.

Indian spices have different chapters written in many different scriptures but the understanding of these tiny little important things in Indian kitchen can come only when we fail in putting the exact amount of it in the delicacy. That is the catch in the science of cooking which becomes better as you grow old.

Indian spice box is a matter of great pride in almost all households. Different states of India has different type of spice box based on the ingredients of the food that they prepare. The food is local, seasonal and as we all know many recipes are passed on from generations to generations. Let’s see what is there in the spice box: 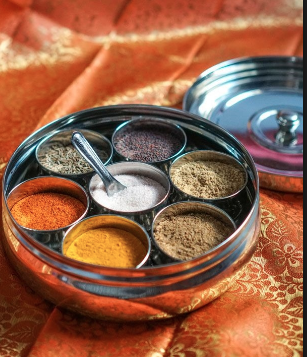 Sourced from the internet.

Marathi especially brahmin food revolves around very few spices and masala dabba has those many spices only. The masala dabba in marathi is also called as “Masala Dani” Dani means container. In my mother’s masala dani, she used to keep Red Chilli Powder, Mustard Seeds, Turmeric Powder, Cumin Powder, Coriander Powder, Salt and Garam or Goda Masala which is often used to make Amti ( Marathi dal) and so on. The other stuff which was sparingly used in the kitchen like Tejpan ( Bay Leaf), Cinnamon ( Dalchini), Chhadila ( Stone Flower ) and so in used to occupy space on the top floor of the spice box. She used these things sparingly. Cloves and Cardamom were used in Mukhwas and had separate place in the shelf. I have two masala dabbas out of which one is “Marathi Masala Dani”

A tamil spice box, literally can be translated into 5 (Anjarai) Petti ( Compartments). This box is the holy grail of Tamil cuisine for sure. South Indian cuisine uses red chillies, urad dal, chana dal, black pepper, jeera ( cumin seeds) primarily in cooking and so Anjarai Petti has these 5 ingredients. This combination of spices becomes so handy mostly while making Rasam which is one of the staple food in South India. One can also add fenugreek seeds and mustard seeds to add the finishing touch to the box. Tamil cuisine also needs fresh herbs almost everyday which includes Coriader Leaves, Kadhipatta ( Curry Leaves) , Ginger, Garlic and Green Chillies. Most households use the freshly ground masalas everyday. The ingredients in Anjarai petti may vary based on the region( Kongu Nadu, Chettinadu and the likes) also as per family tradition this spice box changes. 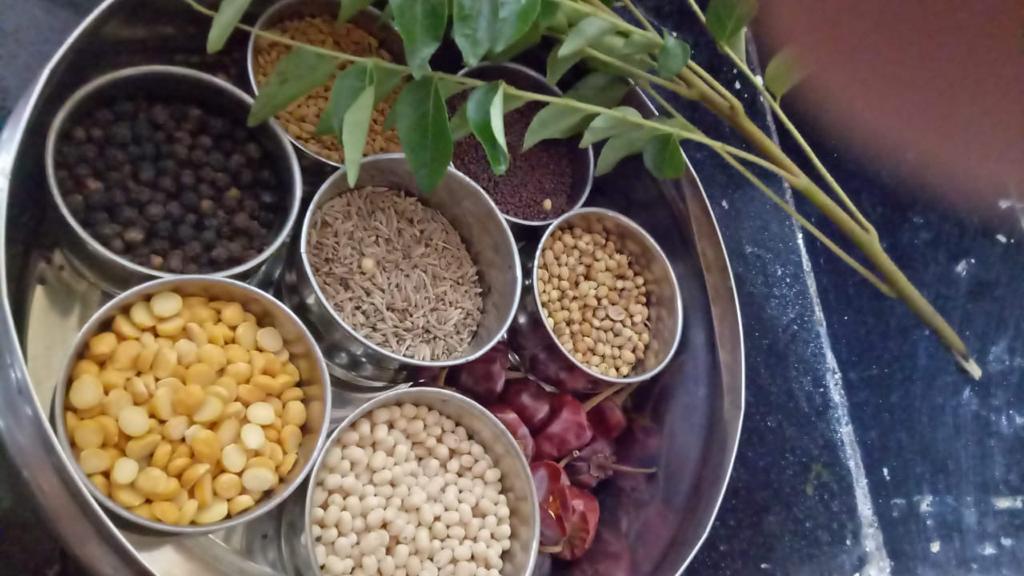 We all love Gujarati food, from Khakras and Theplas, to Dhokla, Undhiyu Gujarati Cuisine is a combination of various spices like any other state in India. Gujrati spice box is called as Masaliyu and it has Hing, Red Chillies, Coriander and Jeera Powder, Cumin seeds, Mustard Seeds, Fenugreek Seeds and Carom Seeds. Gujarati recipes also use Amchur frequently. The most cherished memory which I have of Gujarati household and their food is that they store their grains and make masalas for the whole year. 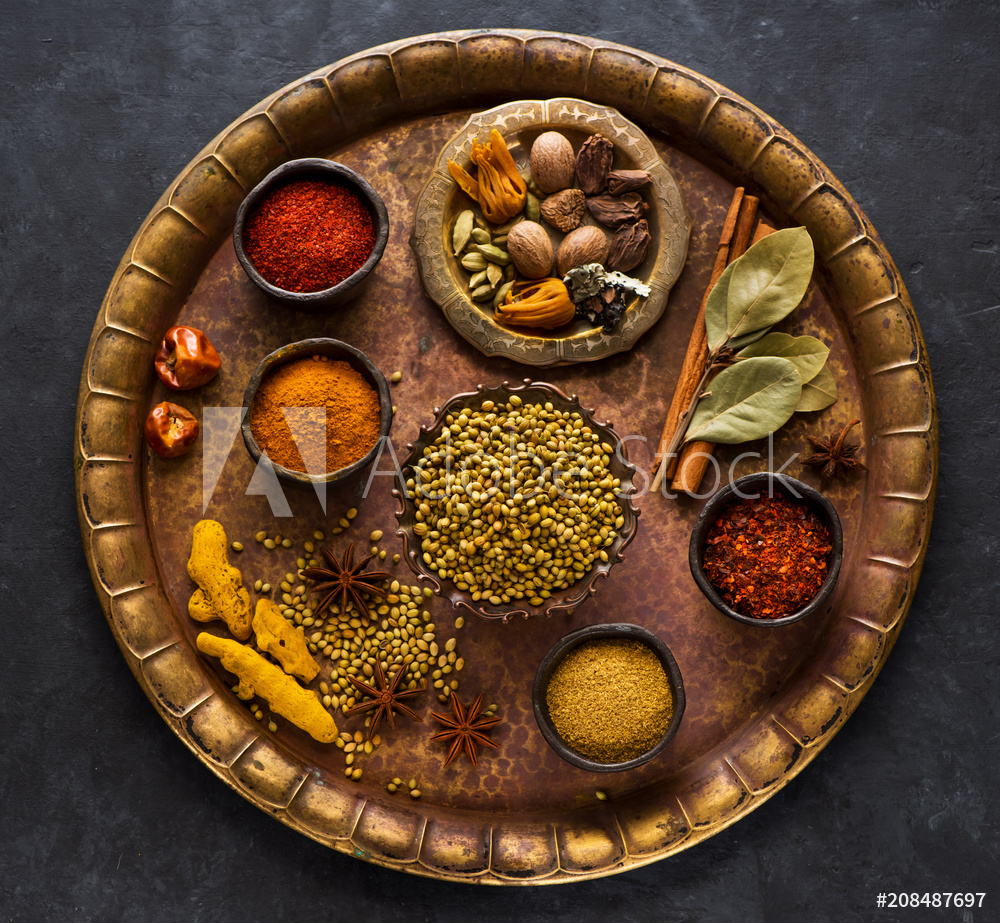 What is bengali food without Panch Phoran..It is a traditional Bengali Spice mix made from five spice hence the name Panch ( Five ) Phoran. This spice mix has black mustard, nigella seeds, fenugreek seeds and cumin seeds which is an integral part of Bengali Cuisine.Be it gravies, chutneys and pickles panch phoran is all there to throw in that special flavour which every Bengali craves for.

Whatever are the spices the concept is the same. My grandmother used to say, all these spices are totally different but

the Masala Dani or Anjarei Petti or Masaliyu or The panch phoran box is a great example of how these different spices co-exist and make the most of the things which they are a part of.

They enhance the taste of any dish with their presence. The same goes with family. Having a Masala Dani meaning we have a bunch of crazy people in one home who stand by their loved ones in difficult times and enhance this experience called life.

Every food has a story, because it has the essence of many generations…. The spice box is no exception..here is to the food and its stories..