Posted at 18:29h in Blog by the5ammommy 0 Comments
0 Likes
Share 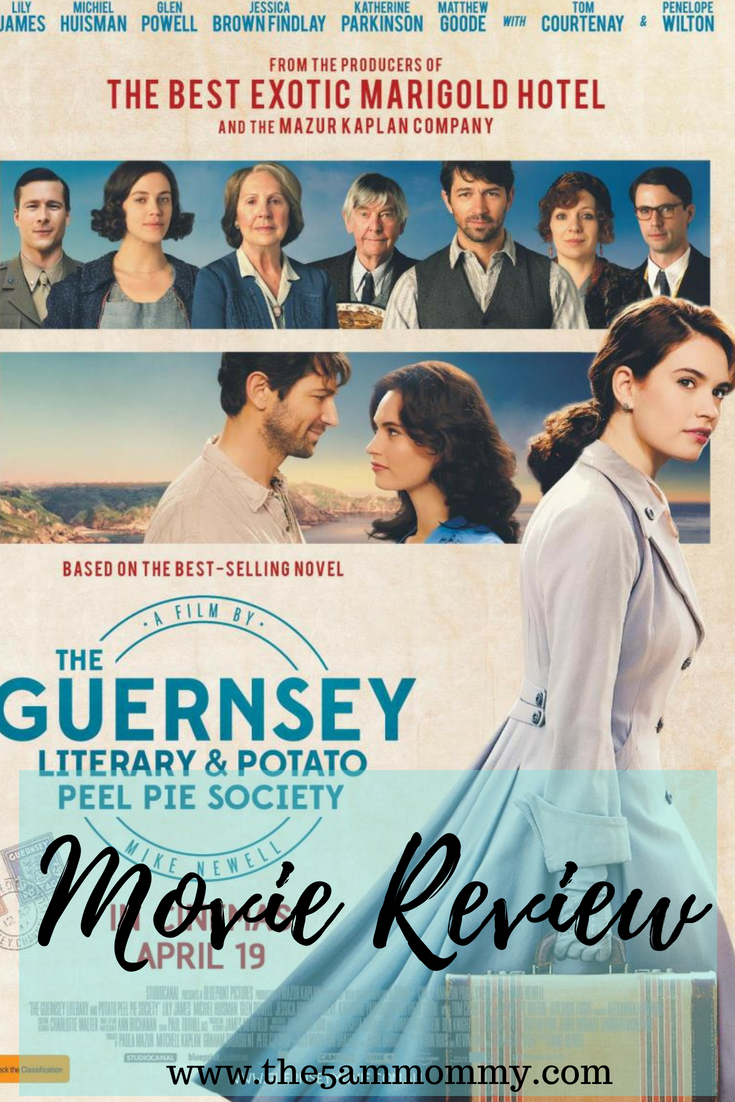 World War II, the struggle of Jews under the claws of German Army. Everywhere there was bloodshed and the small City of Guernsey was not exception. Here is a movie review of a movie ” The Guernsey Literary and Potato Peel Pie Society”

Last week was not as great. I fell down and twisted my ankle, had severe neck and head pain. Already in the pain, I was helpless and rested. One such evening and I came across this wonderful movie of Lily James ( Cinderella fame). The Guernsey Literary and Potato Peel Pie Society. The name is quite mouthful but the movie was certainly awesome.

Based on the backdrop of World War II, the novel is written by Mary Ann Shaffer‎; ‎Annie Barrows, believe me I am not yet an avid reader so, I did not know this book too.

Surfing on Netflix is not bad as they say, it just gets you movies of different genres at your fingertip and nothing is more addictive than that.

Four neighbours Mrs. Maugery, Isola, Dawsy, Elizabeth and Eben meet over a dinner. But this dinner is special. It is a feast for all these people who have been suffering from acute starvation. In the fear of getting caught ( during world war any type of gathering was prohibited), Elizabeth says that they met for book reading and the name of their book reading club is spontaneously tossed by Elizabeth as The Guernsey Literary and Potato Peel Pie Society. Potato peel pie is in the memory of the pie made of potatoes by Eben. As interesting as it sounds, these people really meet over book reading sojourns, they read and read a lot.

“We read books, talked books, argued over books and became dearer and dearer to one another.”

In the meanwhile, you have Juliet Ashton, a writer from London, who has a typical life of a writer but she has a quest of something new and better. She receives a letter from Dawsy Adams of The Guernsey Literary and Potato Peel Pie Society asking her to send one of the books and stating their condition as well as the story of the society.

This intrigues Juliet to the point that she goes to Guernsey. The movie depicts the inward journey of Juliet as she reaches Guernsey, meets and knows these people.

“Perhaps there is some secret sort of homing instinct in books that brings them to their perfect readers. How delightful if that were true.”

The movie was simple yet sent a very powerful message. The depiction of world war II and the struggle of people is portrayed very realistically.  We can only imagine the problems that Jews faced during WWII. I have read “Diary of Anne Frank” and that along with some history lessons are my windows to WWII. I was glad that I could finally see something related to WWII.

Guernsey Literary and Potato Peel Pie Society is heartwarming and fresh, at the same time it makes you think about the hardships that people faced during WWII. Juliet and her journey inwards could be felt in due course of the movie and it ended on a positive note. In short, the movie has everything which makes it a good watch.

“All my life I thought that the story was over when the hero and heroine were safely engaged — after all, what’s good enough for Jane Austen ought to be good enough for anyone. But it’s a lie. The story is about to begin, and every day will be a new piece of the plot. ”

These people with the reading society started breathing books. In any of their dialogues you will find Charlotte Bronte’s quote or you find Jane Austen. While reading these books which were the only entertainment that they had and the only way to be positive in their lives, these people would be transcending themselves in the world of no chaos no world war which made it so special.

Three days on and I have not been able to forget the movie and some of the dialogues.

Some things stay with your heart forever. I am sure this movie is one of them….

I should also read the book perhaps.