Posted at 14:41h in Blog by the5ammommy 0 Comments
0 Likes
Share

Chocolate is one of the most popular desserts in the world. In the baking world, it’s used as a sweetening agent, and in the confectionery world, it’s used as a flavoring agent. The facts about chocolate’s history are long. It’s believed that the Mayans and Aztecs were the first people to use chocolate as a drink. They used it as a way to worship their gods. The Europeans wouldn’t discover chocolate until Hernando Cortes discovered it in the 16th century. He was a Spanish explorer who brought it back to Europe, where it was quickly used as medicine. To find out more facts about chocolate, go through the blog below.

Chocolates Are Vegetables, Sort of

As we all know, chocolate is one of the most popular treats in the world. It’s a mix of roasted cocoa beans and sugar, and a combination that is truly addictive. People love to eat it, drink it, and even cook with it. But, did you know that chocolate is considered a vegetable? Well, sort of. The reason for this is the cocoa beans from which chocolate is made.

Chocolate is healthy food to have in one’s diet. In reality, some recent studies suggest that cocoa, the basis of chocolate, has significant health benefits. Cocoa has been proven to lower blood pressure, enhance circulation, and reduce the risk of diabetes and coronary heart disease when consumed in its natural state.

Cacao was brewed in both Mexican and Aztec cultures, though the end product was nothing like today’s hot chocolate—it was a bitter concoction that was frequently served during weddings.

The nutrition facts about chocolate bars are that, according to studies, eating a reasonable amount of dark chocolate daily can considerably lower stress hormone levels and reduce stress metabolic effects. Furthermore, the facts about dark chocolate are that it not only contains serotonin, an antidepressant, but it also stimulates the generation of endorphins, which might improve a person’s sense of pleasure.

Roasting cocoa beans has a purpose.

Raw cocoa beans have no taste like chocolate and contain bacteria that are potentially harmful to humans. A chemical reaction occurs when cocoa beans are roasted, and proper roasting is required for tasty chocolate.

When was chocolate invented?

In 1847, J.S. Fry and Sons, a British chocolatier, created the first chocolate bar by combining sugar, chocolate liquor, and cocoa butter in a paste. Daniel Peter, a Swiss chocolatier, is credited with creating milk chocolate in 1876 by mixing dried milk powder with chocolate.

[You May Also Like: 21 Amazing Facts You Did Not Know About Pizza]

What country eats the most chocolate?

In 2017, Switzerland was the leading country in terms of chocolate consumption per capita, with people consuming about nine kilos of sweet treat.

How many pounds of chocolate are consumed each year?

Each year, the United States consumes 2.8 billion pounds of chocolate, or nearly 11 pounds per person.

How did chocolate get its name?

According to Sampeck, the word chocolate first appeared in European and Mexican manuscripts around 1580. It wasn’t just another term for cacao; it was the Pipil’s Indigenous Nahuat word for the Izalcos’ special drink, from which the earliest prototype recipes for what we now call chocolate evolved.

Chocolate was first enjoyed by

The Olmec, one of Latin America’s ancient civilizations, were the first to transform the cacao plant into chocolate. Chocolate was used as a medicine and was consumed during ceremonies. The Mayans hailed chocolate as the drink of the gods centuries later.

Cacao beans have been used as a sort of payment in the past.

The historical fact about chocolate is that the Cacao beans were so beloved and valued by the Aztecs that they began to use them as currency during their civilization.

The very first bar of chocolate

Although cacao originated more than 4,000 years ago in Central and South America, Africa presently produces over 70% of the world’s cocoa. Cote d’Ivoire is the world’s greatest cocoa producer, accounting for nearly 40% of global production.

Cacao trees can live for 200 years, but only 25 of those years are spent producing commercial cocoa beans. Cacao pods are harvested from the Cacao tree, which can be found throughout the tropics. Every year, each tree produces about 30 pods.

How many cocoa beans to make a pound of chocolate?

Approximately 400 cacao beans are required to make one pound of chocolate. And 40 cocoa beans are used to make a two-ounce bar of 70% dark chocolate.

Where do chocolates come from?

Chocolate is produced from the fruit of cacao trees native to Central and South America. Pods are the fruits, and each pod contains about 40 cacao beans. To make cocoa beans, the beans are dried and roasted.

She was the one who came up with the classic chocolate chip cookie. Nestle semi-sweet chocolate pieces were added to her original recipe. Nestle rewarded her with a lifelong supply of chocolates in exchange for her recipe. 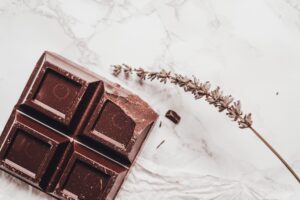 Chocolate is a meal that is enjoyed by people of all ages, yet many people are unaware of the benefits of chocolate. One of the advantages is that it can boost the health of your heart. The flavonoids in chocolate can lower blood pressure and improve the circulation of blood in your heart. The antioxidants in chocolate help to lower the risk of blood clots in your heart and can reduce the risk of heart failure by about 30%. To find more interesting facts related to the food you consume, follow our site and read our blogs.

The Olmec, one of Latin America’s ancient civilizations, were the first to transform the cacao plant into chocolate. They utilized chocolate as medicine and drank it during rituals. The Mayans hailed chocolate as the drink of the gods centuries later.

2. What makes chocolate so special?

Flavanols like epicatechin and catechin, as well as anthocyanins and phenolic acids, are abundant in chocolate. All of these substances serve to protect your cells from inflammation, enhance your immune system, and improve your brain function, and that’s what makes chocolate so special and healthy.

3. Which chocolate is the most expensive?

La Madeline au Truffe, rated the most expensive chocolate in the world by Forbes, is unlike any other chocolate. It begins with 70% Valrhona dark chocolate and is then blended with a range of components such as truffle oil and vanilla.

4. Which nation consumes the most chocolate?

Switzerland ranked no 1 in chocolate consumption per capita in 2017, with residents consuming approximately nine kilograms of the delectable dessert. Chocolate is famous in Switzerland, and it looks like they can’t get enough of it.

6. What are the nutrition facts about dark chocolate?

A 1-ounce serving of dark chocolate with cacao contents ranging from 70% to 85% contains 170 calories 2 grams of protein 12 grams of fat 13 grams of carbohydrates 3 grams and 7 grams of fiber Sugar.

7. What are some interesting fun facts about the chocolate chip cookie?

8. What are the scientific facts about chocolate?

Everyday consumption of dark chocolate reduces the risk of heart disease by 1/3. Flavonoids present in cocoa products have antioxidant, anti-inflammatory, and anti-clotting properties that help improve insulin sensitivity and lower the risk of diabetes. Theta brain waves, which are associated with relaxation, are induced by the smell of chocolate.

9. What are the facts about Godiva chocolate?

Godiva is a Belgian chocolate company founded by Pierre Draps in 1926. The company develops 30 to 40 new recipes every year, however, some of the founder’s original formulas are still used.

10. Facts about why chocolate milk is bad for you?

Chocolate milk has a lot of saturated fat and sugar, which can be harmful to the heart.