Strangers In The Night – A Short Story 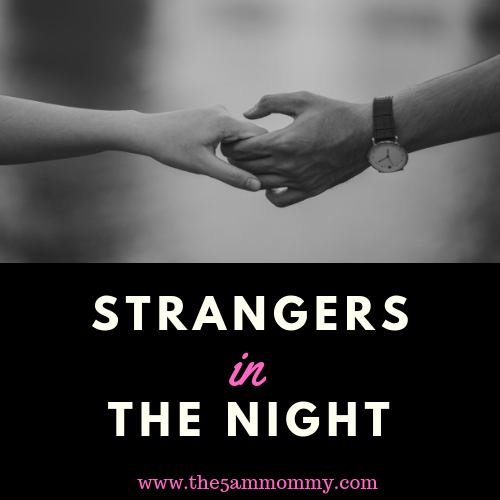 18 Feb Strangers In The Night – A Short Story

A soft jazz was playing as Nilambari was sipping on her Vodka along with her best friend Nilay. It was all perfect, a candle light dinner, on a rooftop restaurant, which was one of Nilambari’s favourite places. Nilambari wore a beautiful black dress with just a pearl bracelet on her wrist which has stars dangling down. Nilambari was a lady of great fashion sense. She always felt like Princess in her own right. Her dressing and her demeanor used to match all the qualities of an erstwhile princess. Nilay had always been a fan of Nilambari, when they dated, even when they did not date, he was her confidante. Nilay was a confident and ambitious young man wanting to get a lot from his life. He was ambitious but much less as compared to Nilambari. Though Nilambari was a quintessential woman, she was more of a dude when she used to be with Nilay. She knew Nilay in and out and Nilay was always very confident that he understands Nilambari very well.

“Yes, yes, I am working on it, why don’t you understand and let me be?” Nilambari disconnected a phone call. It was the third time that she had got a call which made her upset. Before Nilay could say anything, she left the table and stood near the railing.

Fierce breeze was brushing through her hair and all she had was a sheer disgust on her face.

The gates open at the Royal Orchard, a very renowned bungalow in the plush locality in the city and everybody gets to know that it is 9.00 am. Ratish Malhotra, a famous industrialist is returning back from his morning workout in his black range rover. Once he is back, the Royal Orchard comes to life. He is first greeted by his staff and then the people waiting in the lobby to meet him,

As he enters the lobby and goes up to get ready, it takes exactly 10 mins for him to hold the first meet at the breakfast table along with Coffee. His secretary Mr. Anandan calls out the first name, Ms. Nilambari Iyengar, MD of Sundaresan and Sons. The file is kept on the table.

The sun rays seep through window curtains and fall on Nilambari’s face. They nearly wake her up to a severe headache. Unable to find aspirin, she reaches the table and drinks a couple of glasses of water only to realize that it was the second time, despite 3 calls from the office, she has missed this meeting. She hardly remembers the conversation she had with Nilay and how exactly did she reach her home.She makes her a fresh cup of coffee and tries to find out ways to face Mr. Ratish Malhotra.

Ratish before being a successful industrialist was her colleague. They used to work together in a law firm. She was a successful lawyer and won a lot of accolades in no time and he was struggling with every case. He simply could not understand the way Nilambari would handle a case and win it. He would often conclude that being a lawyer was not his cup of tea. Belonging to a very rich and famous family of lawyers Ratish had to take up this profession. There was a sort of competition and comparison between these two. One of who was self made and other one had a legacy. One who was patient and other was ambitious.

After a great courtroom drama which unfolded  in the morning, Nilambari was unfluttered for she knew that the case was hers. She was steering clear from the courtroom and suddenly saw Mr.Ratish Malhotra coming towards her . She was surprised to see him in the corridor..a very unlikely place to meet for a billionaire like him. He was fitter than before and was wearing a nice blue shirt with dark blue trouser, neat leather shoes..shirt with the diamond cufflinks and a rado watch..she was in short of a sigh when she saw him suddenly emerging from the white walls of the court corridor it was certainly a sight to behold. Nilambari always liked powerful men. She always respected the hard work that it takes to reach at that place and adored Ratish for his tenacity. Ratish came close to her and gave a peck on her cheek, as nothing has ever happened between them. Nilambari was startled with sudden display of affection. He just caught her off guard. He was just being himself Nilambari thought for a fraction of second. He stood in front of her and she was fidgeting with the file in her hand.

Why you did not turn up for the meet today? Nila..asked Ratish..

And why have you been avoiding me? That hit Nilambari very near to the hurt that she had from a long time. She tried to be a professional citing reasons but her eyes spoke the truth. Ratish had got the papers to be signed and asked his secretary to get it done..he once again looked at Nilambari and held her hand as if he was assuring. In a fraction of second, he left. Before she could think anything, she had to return to the courtroom and had to win the case, with some final argument. It was just a cakewalk for her.

Courtroom was always her favourite place, she felt secured there. Mentally and emotionally. There was one more place which she felt at home “A Racecourse”. While studying in Lawschool, it was the place which Nilambari and Ratish spent most of their time. Ratish was from a very wealthy family, which owned race horses. Watching them getting groomed and all ready for the races was their favourite thing. Nilambari had this fetish with animals, she always felt closer to them, hence, it was natural for her to get attracted to horse training and working with animals. Besides, much like the law school, horse training was a mind game.

Sundaresan and Sons was the company which hired both of these graduates as trainees. As time passed Nilambari became a successful lawyer and was considered to be the board member of the company. Ratish was just a normal lawyer making money and contacts for his future endeavors for he always knew that there is something else awaiting him. In no time, Nilambari became one of the board of directors and soon she took over the company. It was her dream to be there at the top of her game, Ratish had been with her throughout and he was glad that she finally received what she deserved so much. Was he really?

Racing was a mind game and Ratish knew when it was the time to pull the horse and make it win the race. As Nilambari was busy winning the cases on behalf of Sundaresan and Sons, Ratish was building up his empire slowly and steadily. He knew Nilambari was heading from the heart and also knew that it was a mistake. She headed the firm with a lot of heart and passion, which was not the sustainable way of heading a firm after all. Heated arguments, blame game, politics and so on was the daily business at the company. Nilambari knew it all but could not change much of it. Ratish left the company as he realized that the situation is more about Nilambari and her ego. Soon, Sundaresan and Sons started to raise debt from the market, without much repayment capacity, leading to bankruptcy. Though Ratish raised his empire slowly with patience, he had an eye on Nilambari and the company. The moment the assets were up for sale, Ratish wanted to acquire it. Nilambari was avoiding the meeting because she had never considered Ratish in her league. She wanted to ace it all, worked for it and underestimated Ratish, which was apparent and now when the company was up for sale, Ratish was the first person who had finished the deal as if he was waiting for this to happen. In the corridor when Ratish came to meet her, she was in deep anguish. She was not sure whether Ratish is doing her a favour or it is a revenge for the way she treated him. But being a horse racing fan, all she knew was to win.

She contacted Nilay and asked him to arrange for the table for two as he would always do. Dressed in a Tiny Black Dress looking beautiful, Nilambari arrived at her favourite rooftop restaurant, a moment later Ratish arrived in jet black tuxedo looking as handsome as ever.

In her mind Nilambari kept thinking “ Do I not destroy my enemy when I make him my lover?”

This post is a part of the Valentine’s Day blog train hosted by www.prernawahi.com & www.vartikasdiary.com, sponsored by Shilpsa,  Kalpavriksha farms & Neha from @bloggingmadeeasier .