03 Aug Anti-Inflammatory Food You Should Know About

Posted at 11:50h in Blog by the5ammommy 0 Comments
0 Likes
Share

Inflammation is the body's initial reaction to infection or injury, and it is essential for both innate and adaptive immunity. It is part of the complex biological response of vascular tissues to harmful stimuli like pathogens, damaged cells, or irritants. Chronic diseases such as arthritis, autoimmune disorders, degenerative joint diseases, diabetes, and cancer are typically affected by uncontrolled inflammation. Eventually, a recent study discovered that consuming anti-inflammatory foods modifies the relationship between body fat and pain in men and women. Adequate intake of specific foods and nutrients can effectively improve inflammation and oxidative stress, resulting in the management of chronic pain. To know more about anti-inflammatory foods go through the article below. 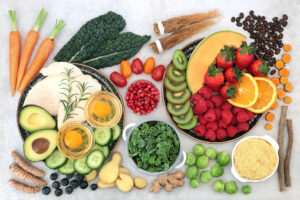 Which are anti-inflammatory foods?

Here is the anti-inflammatory diet food list that is healthy:

Extra virgin olive oil is the primary source of lipids in the Mediterranean diet (EVO). Because of their anti-inflammatory, antimicrobial, and antioxidant properties, these lipids (high in MUFA) have been identified as an important factor contributing to the positive health profile of the Mediterranean population. All chronic pain patients should consume EVO daily, preferably raw, as a seasoning for food, as well as olives once a week, for example, to be added to salads.

Our bodies provide an ideal environment for bacterial strains to thrive. These microorganisms are not always pathogenic; in fact, they are frequently a strong defense and security barrier. The gut is the most colonized tract of the human body, and the overall resident bacteria form a complicated and diverse ecosystem-defined microbiota. The consumption of yogurt on a daily basis can help to prevent the alteration of the microbiota caused by opioid therapy. It's also a great way to combat the inflammatory state that plagues chronic pain patients.

Eggs contain a variety of nutrients, including fat-soluble and B vitamins, minerals, choline and carotenoids, high-quality proteins, and bioactive components with both pro- and anti-inflammatory properties that aid in the fight against inflammation in human populations.

According to scientific evidence, dairy foods such as milk, yogurt, and cheese do not cause inflammation and can be included in anti-inflammatory diets. Cheese, mainly those high in whey protein, should be consumed at least twice a week.

Foods that are highly inflammatory

The food that is highly inflammatory that should be avoided are listed below.

Excess sugar consumption leads to tooth decay and has been linked to an increased risk of obesity, inflammation, and chronic diseases. Sugar-sweetened beverages, such as soft drinks, fruit drinks, and punches, are major sources of dietary sugars that many people overlook. Pastries, desserts, candies, and snacks with corn syrup, dextrose, fructose, golden syrup, maltose, and other obvious sugar-laden ingredients should be avoided or limited.

Trans fatty acids are known for their double whammy effect, increasing 'bad' cholesterol while decreasing 'good' cholesterol. But that is not all they are capable of. They have also been linked to inflammation, obesity, and insulin resistance, laying the groundwork for degenerative diseases.

Meat contains a substance called Neu5Gc, which humans do not naturally produce. After consuming this compound, the body produces anti-Neu5Gc antibodies, triggering an immune response that may result in a chronic inflammatory response. Low-grade, persistent inflammation has been linked to cancer and heart disease.

Artificial food additives such as aspartame and monosodium glutamate (MSG) have been linked to inflammatory responses, particularly in people who already have inflammatory conditions such as rheumatoid arthritis.

Curcumin is a naturally occurring yellow pigment derived from turmeric, a ginger family flowering plant. It has traditionally been used in food products as a colouring and flavouring spice. Curcumin has long been used in Ayurvedic and Chinese medicine as an anti-inflammatory, digestive aid, and wound healer. Several clinical trials have shown that curcumin has antioxidant, anti-inflammatory, and anti-cancer properties.

The bark of the white willow tree is one of the oldest herbal remedies for pain and inflammation, having been used as an analgesic and antipyretic agent by ancient Egyptian, Roman, Greek, and Indian civilizations. Because of the gastric side effects of aspirin, white willow bark has seen a resurgence in its use for the treatment of inflammatory syndromes.

A diet high in anti-inflammatory foods is essential for reducing inflammation..