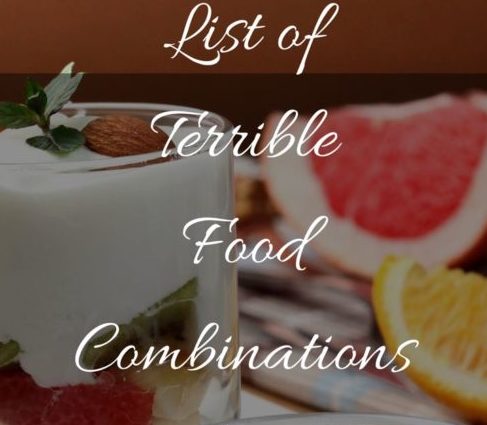 03 Jul List of Terrible Food Combination As Per Ayurveda

Food that causes aggravation of doshas, which is the main reason for disease , is called viruddharam (incompatible food). The effect of this gets accumulated in the body and gives rise to diseases. It should be considered similar to poison and artificial poisoning (Gara Visha). Here are some of the examples, which so many of us take as regular food.

In our Sastras eating food is just like performing the yagna into the fire in the belly.  Now the aahuti which we put in the yagna has a lot to do with the well being of the body. There are some rules which should be followed while cooking and eating food.

Do sizzlers,  brownie Ice creams,  Milk Shakes invite you? Well, here is what you should know about it.

All sour substances are incompatible with milk.So are all the fruits.

Now a day most of the people are taking milkshakes, thinking that it is very nutritious, but in contrary it is a causative factor for many ailments like skin diseases.

Milk and salt are incompatible with each other and yet we add milk to the packaged cereals. In case you are wondering about the ingredients of Kellogg’s Corn Flakes. Here they are: Corn (88%), sugar, salt, barley malt extract, vitamins(vitamin C, vitamin E, niacin, riboflavin, thiamin, folate), minerals (iron, zinc oxide).

After consuming leafy vegetable drinking of milk should be avoided. Many fitness enthusiasts swear by the green smoothies. But

Green Smoothies is an example of blending incompatible food.

Horse gram is the next superfood. Drinking horse gram porridge with milk is not advisable.

For many recipes, curd is the important ingredient.  For example, to prepare morkuzhambu, people use curd instead of using buttermilk. It is always better to use buttermilk instead of curd for preparing curd based food.

Banana with curd or buttermilk.

Overnight oats are the greatest example of combining incompatible foods.

Soaking oats in curd or milk and topping it with banana and fruit of your choice is something people love to eat as a breakfast in the morning. It is easy to make and ready to eat but it should be avoided given the ill effects of incompatibility of these ingredients.

Wheat with hot water and with sesame oil should not be used.

Those people who have been non-vegetarians and have been eating fish all their life would always say that fish with dairy is not a favorable combination. So if you are eating your fish with curd rice, please eat it with rasam rice going forth. 🙂

Radish with soup of black gram.

Radish with black gram is a bad combination and should be avoided.

Ghee kept in a bronze vessel more than 10 days.

Ghee if kept in the bronze vessel gets poisonous, so it is better to avoid it.

A mixture of the equal quantity of ghee & honey.

We should not only avoid consuming processed & packed foods but also food with a bad combination because it is one of the main reason for all lifestyle diseases like BP, DIABETES OBESITY & also CANCER.

About me – I have been practicing Ayurveda for the past 18 yrs in a traditional way, I have experience in all Panchakarmas, I’m part of an NGO – AVAS, where I’m educating & treating underprivileged children.